One of the unique aspects of being human is the role stories play in our lives and have played as far back as the human story is told. Stories inspire, enlighten, connect, delight, warn, admonish and surprise. We need them with an urgency that resembles hunger. Not merely entertainment, stories can save lives or turn us into killers.

In 1955, when I was thirteen, I went to the Museum of Modern Art in New York to see a photo exhibition that has haunted me ever since. Its theme was “The Family of Man.” The curator, Edward Steichen, brought together a vast sequence of photos that not only asserted but demonstrated that, for all the diversity of culture, skin color, local economy and development, varieties of religion and differences of clothing, we are indeed one human family bound together in love, pain, labor, awe, anger, gratitude and death. I bought the exhibition book and have hung onto it through many moves, returning to it ever since as if it were a Bible without words. Taken as a whole, the collection has as its golden thread the radical us-ness of being. It helped me understand that beneath our separateness is our unity. It’s about the “our” in the Our Father.

Among the images that I especially love is one of an old African storyteller in a fire-illuminated hut. We see him at the top of a circle of young people, boys and girls who are listening to the old man with absolute attention and wonder. The storyteller’s eyes are wide open, his mouth a perfect O, his eyebrows arched high into his forehead, his hands raised above his head, all ten fingers outstretched. If he were telling the story of Jesus’s life, this might be the moment when the disciples discover the empty tomb. 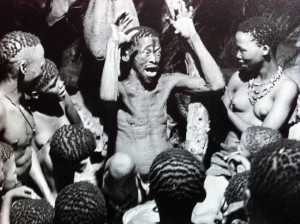 The photo is an icon of the power of story telling.

“In traditional African cultures, not even the chief or the healer is as important as the storyteller,” Joseph Donders, a Dutch priest who had spent much of his life in Africa, once told me. “The survival of the tribe from generation to generation depends on stories, but only so long as the stories reveal truth. With truth-revealing stories the storyteller becomes the guardian not only of his actual audience but of those not yet born. This is because, in times of crisis, people are guided not by theories or principles but by stories. True stories are life-saving, false stories lead toward disaster. Stories are proven true by the test of time. An old story that has been told for centuries and has been tested in many times of crisis can be regarded as true.”

“The testing of stories,” he added, “requires the passage of many generations. In fact two thousand years is about right.”

Our conversation led us to consider the question of what was the most basic story in the modern world. We quickly agreed that, in its purest form, it’s the western movie and decided to call it the Gospel According to John Wayne. (Not John Wayne the man, who may have been as nonviolent as Gandhi, but John Wayne the actor in the gunslinger roles he often played.)

At that the core of the Gospel According to John Wayne is a good man with a gun defeating bad men with guns.

In the classic Western version, it’s the story of men who are evil to their core threatening decent people in a newly-settled town in the lawless West in which there is a battered saloon at one end of the street and a newly painted church and school house at the other. Endangered by pathological killers, the well-being of the townspeople depends on the courage of one brave man and those, if any, that he is able to rally behind him. The iconic scene is the gunfight on Main Street — one man with a gun facing another man with a gun and both pulling the trigger. There is sometimes a prefatory scene before the shoot-out in which we see the reluctant hero open a drawer and grasp his revolver, a weapon he once put away with the hope of never using it again. He is not, such scenes make clear, a man of violence but now there is no alternative. He straps on his holster, inserts six bullets in the gun’s chambers and walks out the door knowing he may be dead within the hour. In fact he survives. Goodness triumphs. It’s the men who love killing whose day ends in coffins.

It’s far from an ignoble story. There is real courage in it — the readiness of an honorable man to risk his life to protect his defenseless neighbors from wicked men whose death we who watch the film cannot help but wish for and, once it happens, welcome. If only briefly, it seems the world has been made a safer place.

Few biblical texts have more profound implications than this passage in the first chapter of Genesis: “God created man in his own image, in the image of God he created him; male and female he created them.”

If so, then there are no bad seeds. Our DNA obliges none of us to commit murder. No matter how damaged a person becomes in the process of growing up and entering adulthood, all of us are born bearing the divine image and can never entirely lose it.

For John of Kronstadt, one of the Russian saints of the nineteenth century, to become aware of this was one of the main challenges of Christian life. “Never confuse the person,” he said, “formed in the image of God, with the evil that is in him, because evil is but a chance misfortune, illness, a devilish reverie. But the very essence of the person is the image of God, and this remains in him despite every disfigurement.” Saint John’s insight was not developed at a comfortable distance from the rough side of life — he was parish priest in Kronstadt, a port city with thousands of sailors and more than its share of drunkenness, crime and violence of every kind.

In common with ordinary Russians at the time, Saint John of Kronstadt avoided dehumanizing labels for men who had been convicted of criminal actions. They were instead commonly referred to as “unfortunates.” It was this attitude that helps explain why so few executions occurred in pre-revolutionary Russia. Those who were convicted of murder and other grave crimes were instead sent to labor camps in Siberia.

The inability to see Christ in the other is the most common form of spiritual blindness, as one of the most prominent saints of the fourth century, John Chrysostom, often stressed. “If you fail to recognize Christ in the beggar outside the church door,” he said, “you will not find Christ in the chalice.” Or as Dorothy Day put it, “Those who do not see Christ in the poor are atheists indeed.” Or as Thomas Merton wrote: “Guard the image of man for it is the image of God.”

Yet the Gospel According to John Wayne remains a compelling story — the brave lone man who puts himself in the line of fire and kills a human monster whose death is a blessing for every decent person. Moral: The community can only be protected by good guys — or good women — killing bad guys.

In the latter part of “Gone With the Wind,” a film that presents slavery as having been not so bad, the heroine, Scarlett O’Hara, returns to her family plantation, Tara, after Southern defeat. Scarlett finds the mansion intact though the crops have been burned, her mother has died of typhoid, her father is insane with grief, her two sisters are ill, and most of the (formerly happy) slaves have run off. Forced to take up labor that in better days had been done by slaves, Scarlett’s life now centers on reviving the plantation through blood, sweat and tears, even if the paradise that the Tara plantation once had been for her is lost indeed. When a drunken Yankee soldier arrives and seems poised to rape Scarlett, she stands on the mansion’s grand curved staircase, revolver hidden behind her back, then, at the last moment raises the weapon and shoots him in the face. Afterward, in shock, she says to her sister-in-law, “I’ve done murder.” To her credit and the credit of the storytellers, Scarlett uses a razor-sharp word, murder, that doesn’t mask what she has done. After pulling the trigger and seeing at close range the death she has caused, perhaps Scarlett realizes she might have aimed at the man’s legs and protected herself without becoming a murderer.

How rare is the movie in which the hero is allowed to aim for the legs or, rarer still, find a bullet-free, nonviolent solution. Film after film, the implicit message is that, in confrontations with evil, there are no non-lethal — still less nonviolent — solutions. It’s a kill-or-be-killed world, period, next subject.

[This is a chapter from Loving Our Enemies: Reflections on the Hardest Commandment: https://jimandnancyforest.com/2014/07/loving-our-enemies/ .]