One weekend Katya went for a visit to the home of her Grandfather Lev and her Grandmother Olga. At the time, Katya’s parents were having difficulties in their marriage. They thought a quiet weekend together, just the two of them, would do them good. So off Katya went, though all was not well between her grandparents either. When they weren’t yelling, they glared at each other in furious silence.

Nor did it cheer them up having their granddaughter come to stay. One thing they agreed about was that Katya was a difficult child: she was full of questions, she hid under the table, she got underfoot, she wanted to help at things she wasn’t good at, she was noisy at play, and she made the dog bark. She forgot to close the door, when she ate she showered the floor with crumbs, she talked with her mouth full, and she made fun of adults.

Katya’s parents always argued that she was an ordinary child.

Katya had been there only an hour when Grandmother Olga began to think about supper. She told Grandfather Lev he had better pull up the turnip that had long been growing in the corner of the garden. “Katya has such a big appetite,” she said, shaking her head, “enough for three well-behaved children.”

So Grandfather Lev went out to the turnip.

He put his big hands on the leaves that marked the turnip’s home in the earth, and tried to pull it up. In his long life, he had pulled up enough turnips for every Russian, but no matter how hard he tried, this one wouldn’t budge.

We all know how men like to open jars and do anything that requires a little muscle, so you can imagine how hard he tried, and how reluctant he was to return to his old foe empty-handed. There was nothing to do but ask Grandmother Olga if she would help in the pulling.

“It seems this is the biggest turnip in the world,” he told her, “one that even Samson couldn’t pull up without help.”

“I’m not at all surprised,” Grandmother Olga replied, giving him a triumphant smile. “It is my experience year after year that men are all talk and boast.”

She marched out to the garden with him, sure of victory. In fact she was someone of real might, but even pulling together, their strength wasn’t enough. The stubborn turnip stayed locked in the ground.

“Surely this is the biggest and best-rooted turnip since the Volga River was first wet,” Grandmother Olga said.

“We had better ask Katya for help,” he said.

He found her searching through his tool box looking for nails. She was reluctant to help, as she was busy building a secret house. Also Katya loved the word “No.” But she could also imagine the taste of the turnip, cooked and mashed and with butter on top — so she said, “Yes.”

But even the three of them were powerless against this mountainous turnip.

“Misha can help,” Katya said. She ran off without waiting for adult objections.

Misha was a dog who generally kept a safe distance from children, as they hid his bones and sometimes tried to ride him as if he were a pony. But Misha, like all dogs, was full of forgiveness and proved eager to help. The four of them pulled together.

Nevertheless, the turnip was unmoved.

So Misha the dog went for Masha the cat. Such humiliation, having to seek help from the cat he so often chased, yet Masha agreed. The warm sunlight in which she had been napping had melted her pride just enough.

Still, even with the force of five, the turnip only trembled in the ground.

So Masha, her tail high in the air, turned to the one member of the household still not in the garden, Tatiana, the mouse who lived behind the stove. Tatiana was an extraordinarily clever mouse, as the cat well knew. It was in her family — Tatiana had a grandmother who had escaped from a trap in the palace of the czar.

Of course Tatiana was nervous to be approached by Masha. This was the very cat who had eaten her husband and several of their children and she had barely survived the cat herself.

But she had eaten a large section of Lev and Olga’s Bible, including the words, “If your enemy hungers, feed him.” In a moment of grace, she agreed to help.

Tatiana approached the turnip while keeping a careful eye on Masha. Turnips have their own roots, she remembered.

She plunged into the ground as if it were hay and tunneled her way to the turnip’s base where she nipped each tiny root with her sharp teeth.

“Even a small brain knows about roots,” Tatiana said to Masha as she emerged from the ground.

Once again Grandfather Lev put his hands on the turnip, and Grandmother Olga held him, while Katya pulled on her grandmother, the dog on the girl, the cat on the dog, and the mouse on the cat. They pulled as if their lives depended on it, and at last the garden gave up its treasure. 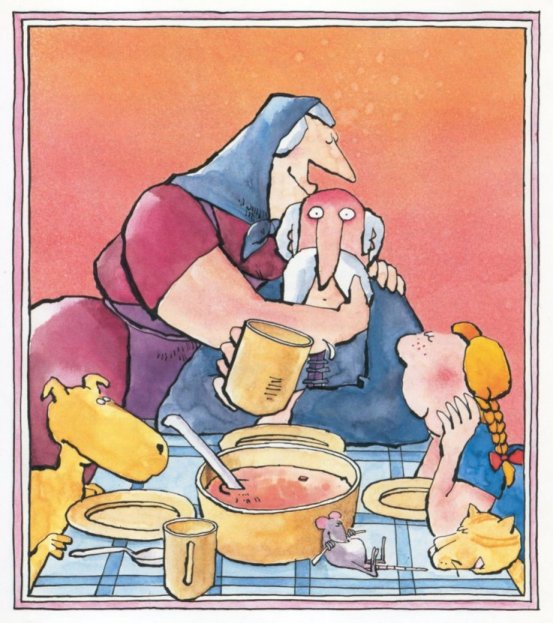 Great was their feast that night. Without fear of the cat, even tiny Tatiana ate all she wanted, and even a little more. Masha purred at the side of Misha. Not a growl was heard and not a cross word was spoken, even afterwards when Katya broke a dish. It is even said that at bedtime that night Olga kissed Lev for the first time in twenty years.

* * *
The text is copyright by Jim Forest, the illustrations by Len Munnik. The Tale of the Turnip was published in 1988 by Marshall Pickering, Basingstoke, England.
* * *