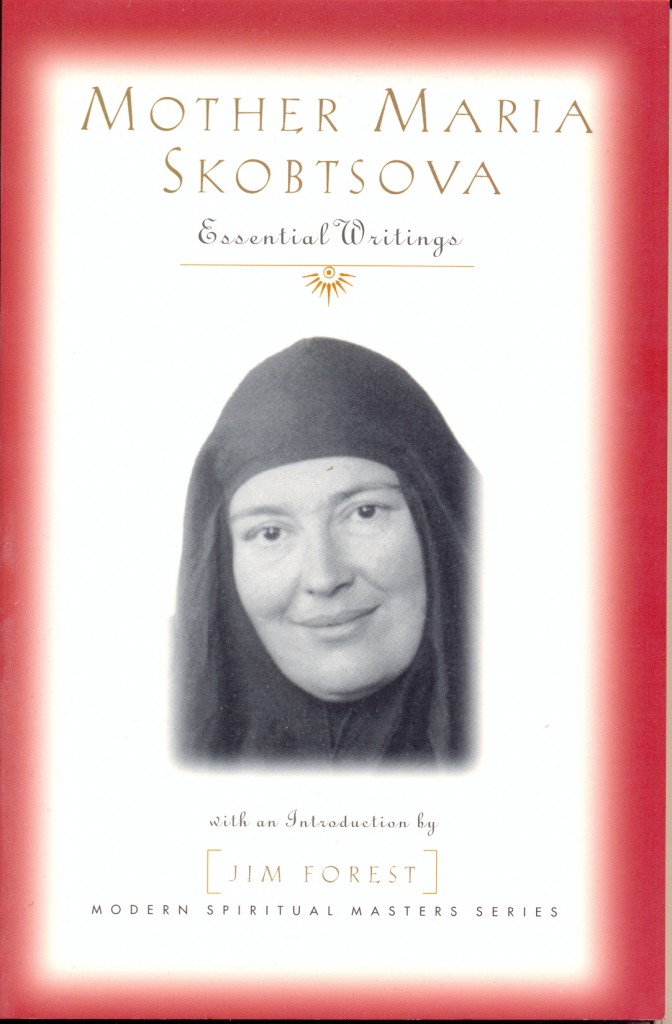 Mother Maria Skobtsova — now recognized as Saint Maria of Paris — died at Ravensbrück concentration camp in 1945, paying with her life for her vocation of hospitality. In many ways, it was a life that  similar to that of Dorothy Day. The extraordinary courage Mother Maria displayed in confronting Nazism is becoming better known, thanks to her recent canonization, but English translations of her essays have been difficult to obtain. Now Mother Maria Skobtsova: Essential Writings is available as part of the Orbis Modern Spiritual Masters Series.

Here is one review:

When, during Great Lent of 1932, Metropolitan Evlogii received the monastic vows of Elisaveta Skobtsova at the church of St. Serge Institute in Paris, many must have been scandalized. After all, this woman had been twice divorced, had an illegitimate child by another man, had leftist political sympathies and was an original by any standard. At her profession she took the name of Maria in memory of St. Mary of Egypt, a prostitute who became a hermit and extreme ascetic. As a religious, Mother Maria continued to scandalize. Her “angelic habit” was usually stained with grease from the kitchen and paint from her workshop; she would hang out at bars late at night; she had little patience with the long Orthodox liturgies, and found the strict and frequent fasts a burden. And — horror of horrors — she even smoked in public in her habit! Her canonization process has been initiated by the Orthodox church. Her “essential writings” constitute the latest book in the Orbis series of Modern Spiritual Masters.

Jim Forest introduces this volume with a biographical essay of Mother Maria. The book consists mainly of articles published in obscure magazines and one long text discovered only recently. This is not stuff for the faint-hearted. The charity that Mother Maria proposes as an obligation of Christian life is severe, absolute, uncompromising and insane. We must love others as Jesus loved, without reserve, in an utter and unconditional self-sacrificing of everything. We must follow the Son of Man not only to Golgotha but beyond — to the very depths of hell where God is absent. We must be willing, as was St. Paul, to be separated from Christ so long as we can see our brothers saved. For we are not alone before God. As members of the body of Christ, each of us shares the fate of all; each of us is justified by the righteous and bears responsibility for the sins of sinners. This means taking upon oneself the crosses of all: their doubts, griefs, temptations, falls and sins.

And Mother Maria leaves us no wiggle room: “It goes without saying that it seems to every man as if nothing will be left of his heart, that it will bleed itself dry if he opens it, not for the countless swords of all of humanity, but even for the one sword of the nearest and dearest of his brothers. … Natural law, which in some false way has penetrated into the spiritual life, will say definitively: Bear your cross responsibly, freely, and honestly, opening your heart now and then to the cross-swords of your neighbor and that is all. … But if the cross of Christ is scandal and folly for natural law, the two- edged weapon that pierces the soul should be as much of a folly and scandal for it. … All that is not the fullness of cross-bearing is sin.” This is, of course, sheer madness — the madness of the Eternal Wisdom, judged and condemned, spat upon and mocked, abused and humiliated, making his the sins of all and descending to the place of the damned.

Mother Maria has no patience with those who are preoccupied with their “spiritual life” and their personal relationship with God. It is precisely this spiritual life that must be lost, given in sacrifice, if one truly loves. If this is not given, tongues and prophecy are useless, faith and martyrdom are in vain. Christian egocentrism is a contradiction in terms. He who seeks to save his soul will lose it. There is no room for complacency or self-righteousness. These are idols that must be destroyed. There is a gift to be given and it must be a total gift — “thine own of thine own.”

What applies to individuals applies also to the church. In her final essay on “Types of Religious Life” (which really concerns types of piety), Mother Maria examines certain aspects of the church’s inner life and the danger of a fascination with its institutional structures, rituals, esthetic beauties and ascetical practices as ends in themselves to the detriment of a relationship to the Living Christ whose image is found in every person. Although she refers directly to the Orthodox church, her words are equally valid for all Christian churches:

“The eyes of love will perhaps be able to see how Christ himself departs, quietly and invisibly, from the sanctuary that is protected by a splendid iconostasis. The singing will continue to resound, the clouds of incense will arise, the faithful will be overcome by the ecstatic beauty of the services. But Christ will go out onto the church steps and mingle with the crowd: the poor, the lepers, the desperate, the embittered, the holy fools. Christ will go out into the streets, the prisons, the low haunts and dives. Again and again Christ lays down his soul for his friends … and so he will return to the churches and bring with him all those he has summoned to the wedding feast, has gathered from the highways, the poor and maimed, prostitutes and sinners … and [they] will not let him into the church because behind him will follow a crowd of people deformed by sin, by ugliness, drunkenness, depravity, and hate. Then their chant will fade away in the air, the smell of incense will disperse and Someone will say to them: ‘I was hungry and you gave me no food …’ ”

This does not imply a rejection of traditions and usages. In another essay, “In Defense of the Pharisees,” Mother Maria underlines the necessity of the collective memory of past blessings and the need for securities and points of reference. During certain historical epochs, of persecution or even in times of relative stability and in the absence of prophecy, adherence to traditions could be the predominant note in the life of the church, its anchor and guarantee. But this fidelity to the past must not become a paralyzing slavery. History is constantly presenting new challenges, and the church must be free to receive the prophetic gifts when such gifts are given and renew itself accordingly. Faced with modernity and bearing witness to the Gospel in our contemporary world, the church cannot let itself be bound by archaic and irrelevant structures.

Mother Maria’s view of the Christian life is anything but horizontal. She has no use for “trends of social Christianity … based on a certain rationalistic humanism [that] apply only the principles of Christian morality to ‘this world’ and do not seek a spiritual and mystical basis for their constructions.” The gift of oneself to others must be rooted in an intense and loving communion with the Son of God “who descended into the world, became incarnate in the world, totally, entirely, without holding any reserve, as it were, for his divinity. … Christ’s love does not know how to measure and divide, does not know how to spare itself.” Our love should not be any different.

In her writings, Mother Maria expresses what she tried to live. After taking her monastic vows — which she saw as a means of committing herself irrevocably to her vocation within the church — she rented a building that became her monastery, a soup kitchen and a refuge for the rejects of society. It resembled a Catholic Worker house more than anything else. One observer described the “monastery” as “a strange pandemonium; we have young girls, madmen, exiles, unemployed workers and, at the moment, the choir of the Russian opera and the Gregorian choir of Dom Malherbe, a missionary center, and now services in the chapel every morning and evening.” The monastery hosted lectures and discussions with speakers from the St. Serge Institute. Mother Maria’s very intense, mystical and personalist convictions did not prevent her from organizing on a larger scale. She founded a sanatorium for impoverished Russians suffering from tuberculosis and was instrumental in the launching of Orthodox Action with its multiple charitable works.

When the German armies occupied Paris, the monastery of Mother Maria became a refuge for persecuted Jews until escape routes could be found. For those who requested them, false baptismal certificates were provided. The Nazis eventually discovered what was going on. Mother Maria, her son Yuri, the monastery’s chaplain and its lay administrator were detained and sent to concentration camps. Only the lay administrator would survive. Those who knew Mother Maria in the camps bore witness to the courage, hope and optimism she imparted to others in the worst of conditions. The date and circumstances of her death are uncertain. There were reports that her name appeared on a list of those sent to the gas chambers on April 31, 1945, and that she offered herself in the place of a young Polish woman — but that has not been fully established.

Maria Skobtsova is, indeed, in the tradition of those fools for Christ who call the church to its essential mission, who strip aside illusions and delusions, a sign of contradiction to all that is human prudence and human “decency.” She challenges us in our complacency and self-satisfaction, our half-measures and sterile piety. She brings a sledgehammer to the all-too-prevalent contemporary search for personal fulfillment, harmony, peace and satisfaction in religion. But she would not be Orthodox if death and suffering were to have the final word — for it is precisely by descending into hell, losing himself among the godless, that life vanquished the dominion of death; where life has entered, death can no longer exist. It is from the tomb that the glory of the resurrection shines forth.

Olivier Clement did the preface to this book. His final paragraph is worth citing: “If we love and venerate Mother Maria it is not in spite of her disorder, her strange views and her passion. It is precisely these qualities that make her so extraordinarily alive among so many bland and pious saints. Unattractive and dirty, strong, thick and sturdy, yes, she was truly alive in her suffering, her compassion, her passion.”

The book can be ordered from the publisher: http://www.maryknollsocietymall.org/description.cfm?ISBN=978-1-57075-436-4

It is also available from independent books shops and such web-based book providers as Amazon and Barnes & Noble.