[an extract from The Root of War is Fear: Thomas Merton’s Advice to Peacemakers by Jim Forest]

Speaking before the US Congress, Pope Francis described Thomas Merton as “above all a man of prayer, a thinker who challenged the certitudes of his time and opened new horizons for souls and for the Church. He was also a man of dialogue, a promoter of peace between peoples and religions.” Merton was notable, the pope added for “his openness to God.”

It was Merton’s openness to God which was the driving force behind his qualities as a man of prayer, as a thinker, as someone opening new horizons, as a man of dialogue, as a promoter of peace, and — to make one addition to Francis’ list — a monk challenging the rule of fear.

Few sentences have helped me so much and so often as these six words from Merton: “The root of war is fear.” In fact fear is the root cause not only of war but of innumerable damaging structures, bad choices and calamitous actions. One could say, “The root of sin is fear.”

Fear is a powerful emotion that has the potential of taking over our lives even when there is no rational threat. A classic example: On October 30, 1938, during a radio dramatization of H.G. Wells’ novel War of the Worlds, many listeners, mistaking what they heard for a genuine news broadcast, became convinced that Earth was being invaded by Martians. As one newspaper put it, a “tidal wave of terror swept the nation.” There were listeners who fled their homes in panic.[1]

Of course there are countless sensible reasons for being fearful: the threat of crime, attack, war, illness, injury, job loss, destitution, homelessness… The list is as long as you care to make it. Such anxieties deserve sober attentiveness without becoming the mainspring of our lives. Fear is useful only when it serves as an alarm clock, a device that wakes us up by briefly ringing but which would drive us crazy if it rang all the time.

Many fears are manufactured or hugely inflated by those who find the creation of a climate of dread useful and profitable: fear of refugees, fear of Muslims, fear of terrorists, fear of minorities, fear of the poor, fear of criminals, fear of the police, even fear of our neighbors. Each day we hear reports of tragedies caused by fear and each day the news gives us a new set of reasons to be afraid. America’s craze for guns, even to possess weapons designed for battlefield use, is fear-driven. In fact weapons used in war are often fired, with irreversible consequences, because of panic. We now find ourselves in a state of fear-driven permanent war.

The toxic part fear plays in our lives is a point stressed by a prominent Greek Orthodox theologian and bishop, John Zizioulas:

The essence of sin is the fear of the other, which is part of the rejection of God. Once the affirmation of the “self” is realized through the rejection and not the acceptance of the other … it is only natural and inevitable for the other to become an enemy and a threat…. The fact that the fear of the other is pathologically inherent in our existence results in the fear not only of the other but of all otherness. This is a delicate point requiring careful consideration, for it shows how deep and widespread fear of the other is: we are not afraid simply of certain others, but even if we accept them, it is on condition that they are somehow like ourselves. Radical otherness is an anathema. Difference itself is a threat. That this is universal and pathological is to be seen in the fact that even when difference does not in actual fact constitute a threat for us, we reject it simply because we dislike it. Again and again we notice that fear of the other is nothing more than fear of the different. We all want somehow to project into the other the model of our own selves.[2]

What is the antidote for fear? Are there any remedies? How at least can fear play a smaller role in the choices we make? The development of a stronger, deeper spiritual life is surely at the core of an answer. If fear is not to have a dominant role in our lives, a great deal of inner strength is needed. Without it the voice of conscience — and the courage to follow it — will be suppressed.

Behind the popularity of Merton’s writing is that he is a door-opener and guide to a more contemplative spiritual life. He equips his readers with courage. He also makes it clear that one need nor be a monk to be a contemplative: As he wrote:

The contemplative life has nothing to tell you except to reassure you and say that if you dare to penetrate your own silence and dare to advance without fear into the solitude of your own heart, and risk the sharing of that solitude with the lonely other who seeks God through you and with you, then you will truly recover the light and capacity to understand what is beyond words and beyond explanations because it is too close to be explained: it is the intimate union in the depths of your own heart, of God’s spirit and your own secret inmost self, so that you and He are in truth One Spirit.[3] 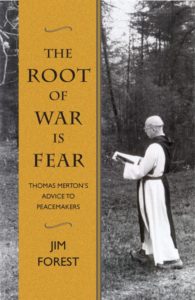 Yes, the world is scary, but also beautiful, magnificent, mysterious, still undiscovered. How long we live is not as important an issue as how we live.

At the heart of Merton’s writing is the message that fear need not rule our lives.