In 1951, the year I turned ten, one didn’t have to be a grown-up to be aware that radioactive particles were in the air. Invisible cancer-causing debris was being carried by the winds from the deserts of Nevada to the far corners of the Earth, and before long was being mixed with the fallout of Soviet, French and British nuclear tests. Radioactive strontium 90 was making its way from mushroom clouds into the food chain, arriving finally in every bottle of milk. 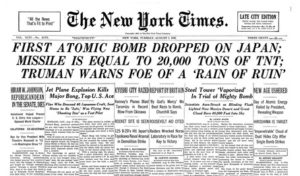 I knew from close range what nuclear weapons could do to those targeted by them. In 1951 two young Japanese women, survivors of the atom bomb that had been dropped on Nagasaki on the 9th of August 1945, arrived in my home town, Red Bank, New Jersey. They were house guests of the local Methodist minister, Roger Squire, and his family. A national peace group had arranged for plastic surgeons in New York to treat some of the people who had been burned by the blasts. The Squires were providing hospitality for two of them. Thanks to my mother’s occasional attendance at Methodist services, I saw these very poised women sitting side-by-side in a pew near the front of the church, their damaged faces hidden behind silk veils. I couldn’t stop staring. Though I had seen a few post-explosion photos of the ruins of Hiroshima and Nagasaki, being in the same room with these two women bought home to me in a more intimate way the human dimension of war, the effects of nuclear weapons, and the fact that the victims of war were rarely those responsible for war. I was also old enough to be aware that taking Japanese victims of America’s atom bombs into one’s home was not something that all Americans would appreciate. In the ice age of the Cold War, such hospitality required courage.

As a kid I read a great deal of science fiction, some of which described our planet devastated by nuclear war. Meanwhile, in the real world, the darkest fantasies of science fiction seemed to be unfolding, political leaders hurrying to make our planet into a radioactive wasteland in which few would be left to bury the dead and the achievements of civilization turned to ash and rubble. We were marching into a blast furnace — not Apocalypse Now but Apocalypse Soon. The nuclear tests going on in Nevada were a death notice.

It was in 1951 that our first television was installed in the living room, its tiny screen not much bigger than a sardine tin. One of the occasional “news specials” allowed us to join the live audience witnessing America’s open-air nuclear test explosions. Cameras, television crews, reporters, scientists and military brass were shielded in concrete bunkers miles from the blast site. Views of the desert were interlaced with interviews with those in the shelter until the countdown began. Ten nine eight seven six… There was at last the word “zero” followed by a split second of silence, then the screen going white followed by the spectacle of an expanding transparent globe of light and fire that gave birth to a seething column of smoke exploding upward in which a kind of fire never seen before 1945 was rotating within the mushroom cloud.

For one of the tests, buildings had been constructed at varying distances from ground zero, with blast-protected high-speed cameras at strategic points. Soon afterward television viewers saw in slow motion the blast’s impact on houses not unlike our own. A two-story white clapboard house turned black on its blast-facing side before the shock wave struck. The structure, as if made of paper-thin glass, was in a flash torn to fragments while the splinters were catapulted away from ground zero by a wind far beyond hurricane strength.

In 1951 there were sixteen U.S. nuclear tests, in 1952 there were nine, and the next year eleven — thirty-six in three years, on average one per month.

While I doubt I watched all of the explosions, in 1953 nuclear war was enough on my mind for me to build a foot-high model of a mushroom cloud using a cardboard tube for the upward shaft and a cardboard disk for the horizontal top layer plus cotton wool sprayed with red, yellow and orange paint. Made for the annual New Jersey Science Fair, this was placed in a homemade wooden display case along with panels of text explaining the destructive effects of a nuclear explosion, augmented by extracts from John Hershey’s book, Hiroshima. My exhibit won no award — it wasn’t a science experiment — but it seemed to me an achievement that my own quiet protest against nuclear war had found a place in the fair. Few fair-goers passed it by.

Ever aware that death by nuclear war was more than likely and possibly not far off, in the fall of 1961 I tacked a magazine cover to the wall of my one-room apartment in Manhattan that was emblazoned with just four words: Get ready to die. It was the verbal equivalent of having, like a medieval monk, a skull close at hand that silently sang out the ascetic message, Momento mori.

In the early sixties each time I heard New York’s air-raid sirens being tested I expected to be shredded into radioactive particles. The sirens would begin their coordinated howling, the blasts punctuated by silences so severe the city suddenly seemed desert-like in stillness. Stunned, momentarily paralyzed by the significance of the noise, I would stop whatever I was doing and stand at a window, waiting for death. There was no need to think about a hiding place. Even were there a massive barrier against the blast and radiation, the blast’s firestorm would consume all the oxygen. Last moments are too important to be wasted on panic. As someone who believed in the resurrection and hoped in God’s mercy, these moments seemed best used for prayer.

But each time the sirens ceased their doomsday howls. There was no sudden radiance brighter than a thousand suns. At such times I felt like an airline passenger setting shaking feet upon solid ground after a no-wheels landing in emergency foam spread out across the runway. Our lives had ended and been given back. We had in our hands another chance to free ourselves from a “security” founded upon the preparation of nuclear holocaust. Another chance for figs to grow from thistles.

I’m now 76. In my lifetime we’ve come in arm’s reach of nuclear war several times. It’s a miracle that no nuclear weapon has been used in war since 1945. For many people this is seen as proof that deterrence works. In the short measure of human life and memory, and in a time crowded with other disasters, Hiroshima and Nagasaki are a long way off. We have begun to count on generals and their subordinates restraining themselves from pressing the nuclear button. We imagine that, for the first time in human history, weapons are being produced and made ready for use — are in fact poised for use with thousands of people in a constant state of readiness to release them — yet will never be used. May it be so. Yet one has to ask the question: has human nature changed since Hiroshima? Do we have to search far to find people who see reality in purely abstract ideological terms? It’s a mentality not uncommon in political and military leadership, no matter what the nationality. Could such people be counted on to leave nuclear weapons on the shelf if other methods failed to achieve the desired goal? Imagine someone with a launch code getting a Doctor Strangelove itch to take “decisive action.”

The button-pushers will be respected, perfectly sane men and women simply doing their job. Such sanity inspired the Trappist monk Thomas Merton to comment:

We equate sanity with a sense of justice, with humaneness, with prudence, with the capacity to love and understand other people. We rely on the sane people of the world to preserve it from barbarism, madness, destruction. And now it begins to dawn on us that it is precisely the sane ones who are the most dangerous. It is the sane ones, the well-adapted ones, who can without qualms and without nausea aim the missiles and press the buttons that will initiate the great festival of destruction that they, the sane ones, have prepared…. No one suspects the sane, and the sane ones will have perfectly good reasons, logical, well-adjusted reasons, for firing the shot. They will be obeying sane orders that have come sanely down the chain of command. [Thomas Merton, Raids on the Unspeakable (New York: New Directions, 1966), 45-53.]

But we are not predestined to commit mass suicide. Partly thanks to the efforts of many people, there are signs of hope that we may get rid of such weapons before they get rid of us. Following nearly a decade of negotiations and international conferences, in July 2017 the Treaty on the Prohibition of Nuclear Weapons came into effect, the first legally-binding international agreement to ban nuclear weapons, with the goal of their total elimination. For those nations that are party to it, the treaty prohibits the development, testing, production, stockpiling, stationing, transfer, use and threat of use of nuclear weapons, as well as assistance and encouragement to the prohibited activities. For nuclear-armed states joining the treaty, it provides for a time-bound framework for negotiations leading to the verified and irreversible elimination of its nuclear weapons program.

It comes as no surprise that none of the states that possess nuclear weapons have yet signed the treaty, but numerous groups, many of them of Christian inspiration, are campaigning for the public support that’s needed to bring about a change of direction — metanoia is the Greek word. What’s needed is as much a religious awakening as it is political. Who could describe as Christian a religion that fails to oppose weapons of mass destruction?