For the past fifty years I’ve been living with a remarkable photograph. I’m looking at it now. It was taken on the 16th of July 1969 by an astronaut who was gazing at his home planet through a thick glass window. I wonder if he didn’t feel like a new Bartimaeus — a man born blind whose eyes have been miraculously opened?

Four days later the Apollo 11 mission reached the moon, an event many millions of people watched on television. In my case, I listened to it via earphones in a cell fourteen bars wide in a maximum-security prison in central Wisconsin. Prison had become my temporary home due to an act of protest against the Vietnam War — I had been one of fourteen people who burned files of Milwaukee’s nine draft boards. Now I was in the early weeks of serving a two-year sentence — in fact just over one year, given the “good behavior” factor. My new address was the sort of grim prison you see in classic crime movies: tier upon tier of cells reached via steel stairways and narrow catwalks, a place that seemed black-and white even when seen in color.

It was perhaps even more exciting to listen to the moon landing than to see the event on television. Radio’s advantage has always been to enlist one’s own imagination for all the visual effects. It was astounding to envisage human beings crossing that airless sea of space, landing, then actually standing — then walking — on the Moon’s arid surface.

In the days that followed the safe return of Apollo 11, as newspapers and magazines made their way to me, I clipped out many of the photos taken by the astronauts in the course of their journey. But the biggest surprise was yet to come: the delivery of a carefully-wrapped packet containing an original print on thick Kodak paper of one of the astronauts’ photos of the Earth — the blue Mediterranean in the center, an orange and green Africa beneath it, a pale green Italy and Spain above, the night’s darkness to the right hiding India, many swirls of clouds. I was astonished at the intense verdant green of the Nile Delta.

The return address on the package was NASA.

The prison administration had made it difficult for me to receive the photo. NASA wasn’t an “authorized correspondent.” I was given the option of the packet being destroyed or being returned-to-sender. At last the warden gave way and it was delivered to my cell. For the rest of my time in prison the photo rested on top of the small table each convict was allowed.

How did this remarkable photo come to me? There was no letter. I could only guess.

Our trial had received a great deal of press attention, including articles in The New York Times. Perhaps something I had said in court about our borderless planet had been read by one of the astronauts and lingered in his memory during the trip to the Moon and back? I could only guess that his sending me a photo was his way of saying, “What you imagined, I saw.”

If I was right about the sender being one of the three astronauts, the donor was an officer in the U.S. Air Force while I was an anti-war protester locked up in a small cell in middle America. How good it was to feel the bond between us.

Which of the astronauts might it have been? A statement from Apollo 11 astronaut Michael Collins makes Collins a good guess.

“I really believe,” he wrote, “that if the political leaders of the world could see their planet from a distance of 100,000 miles their outlook could be fundamentally changed. Those all-important borders would be invisible, our noisy arguments silenced. The tiny globe would continue to turn, serenely ignoring its subdivisions, presenting a unified facade that would cry out for unified understanding, for homogeneous treatment. The earth must become as it appears: blue and white, not capitalist or Communist; blue and white, not rich or poor; blue and white, not envious or envied.” [Carrying the Fire: An Astronaut’s Journeys, Farrar, Straus and Giroux, 1974]

The vibrant image of the whole Earth gradually revealed itself as an icon. In its deep stillness, it became a center point for prayer and an object of contemplation — this planet without borders, not one of whose population is unloved by God, a planet given us to share and care for, to love and protect, a fragile home in a universe beyond all measurement and knowing.

We may live in this or that country, but our national addresses are just street numbers along the same boulevard. We all live on this amazing speck of blue, white, green and orange with a thin layer of life-nurturing air wrapped around it. Our home.

The Apostle Paul wrote that we Christians are neither Jew nor Greek. It’s a text that invites additions. We are also neither American nor Russian, Indian or Ukrainian, Korean nor Saudi, black nor white, but one people for whom, in the vastness of God’s mercy, Christ became incarnate, lived, died and rose from the dead.

> A suggestion: Carry a whole Earth photo with you on your mobile phone. Wear it as a badge. Add it to your icon corner. 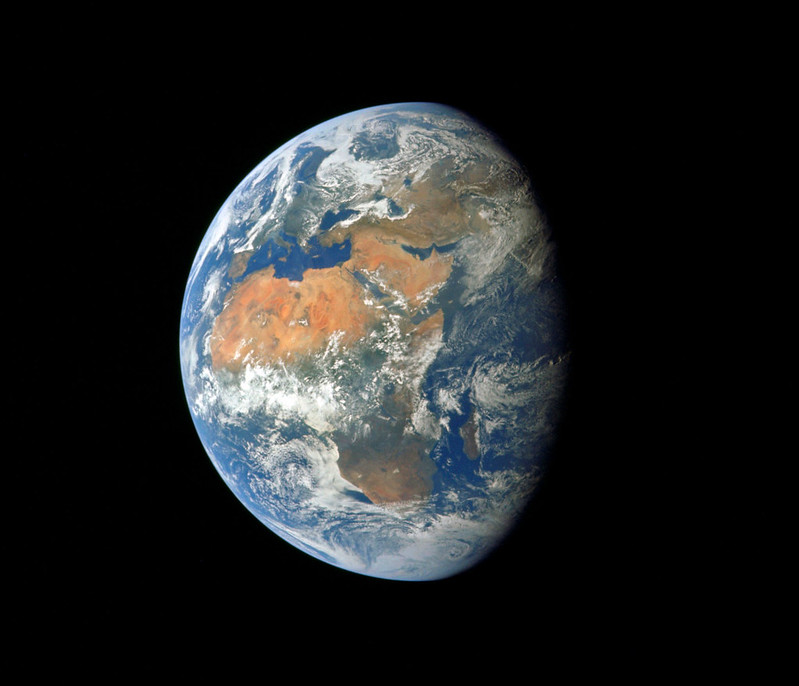 A drawing I made of the book table I had in my prison cell; the Whole Earth photo is on the upper right.