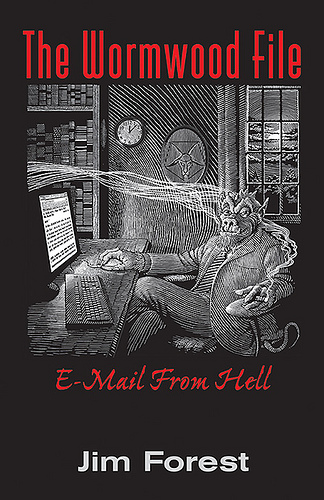 Sixty years ago, C.S. Lewis’ book, The Screwtape Letters, was published in England: an exchange of letters between a senior and junior demon. It appeared in a world in which participation in church life was society’s default setting.

Six decades later a fresh exchange of demonic correspondence, this time in the form of e-mail, has come to light: The Wormwood File. In Wormwood’s advice to Greasebeek, we discover that today’s demons are preoccupied with a new set of issues: New Age movements, war, abortion, pornography, the internet, a culture of self-affirmation. Yet a tempter’s goals haven’t changed since the days of the Garden of Eden.

The Wormwood File is a deadly serious exchange — with a humorous twist.

At the end of C. S. Lewis’ Screwtape Letters (1941), the recipient of those missives on the art of temptation, the junior demon Wormwood, was in a pickle — indeed, might become a pickle, so to speak, for his uncle-advisor’s hellish delectation. Forest reveals that Wormwood survived and now advises yet-more-junior tempters, including one Greasebeek, whose first case is the subject of these e-mails. The “client” is a young married man who, when the correspondence begins, has bought a Gregorian chant CD. Not to worry, says Wormwood; most who buy such things “barely listen to what is being sung” and even “give up on Christianity simply because the music in actual churches doesn’t measure up.” Besides, the client disfavors “organized religion”: “What a useful phrase that’s been!” Wormwood crows. But, as in Lewis’ classic, things go from bad to better for the client. As they do, Wormwood’s comments on both contemporary spiritual fashions and age-old temptations illuminate by contrast the strengths of orthodox Christian belief. The Wormwood File is a worthy sequel to a perdurable popular-theology masterpiece.
— Booklist review by Ray Olson

The Wormwood File is a heavenly work by a helluva author! Not so much a treatise on temptation as an epistolary novel, it does what C.S. Lewis and others have done; that’s to say, describe the stalking of a soul by a satanic predator, but in a satiric way. Upon reading the novel, one can’t help but look over one’s shoulder, for, as Scripture tells us, we’re next on the list. Read now, laugh now, but also repent now!

Relevant, up to date temptations and timely demonic advice. From the firewalls of hell, an insiders’ peak at demonic correspondence revealing the other side of allurements by Screwtape’s up-and-coming nephew. The Wormwood File captures the playful spirit of C.S. Lewis with modern temptations, postmodern issues, and new age dangers. Great satire!

Available from many book shops as well as from the publisher, Orbis Books, on the Orbis web site.